I was almost four and a half in the summer of 1977. Just a baby nerd-introvert. My mom was having a Tupperware party and wanted everyone out of the house, so my dad took my sister and me to the movies.

I was so small that I could stand up in the row and put my chin on the seatback in front of me. I remember wearing white plastic barrettes in my hair on either side of my bangs, the drugstore kind that came on a card with three other colors. Dad and my sister both fell asleep.

These Aren’t the Droids You’re Looking For 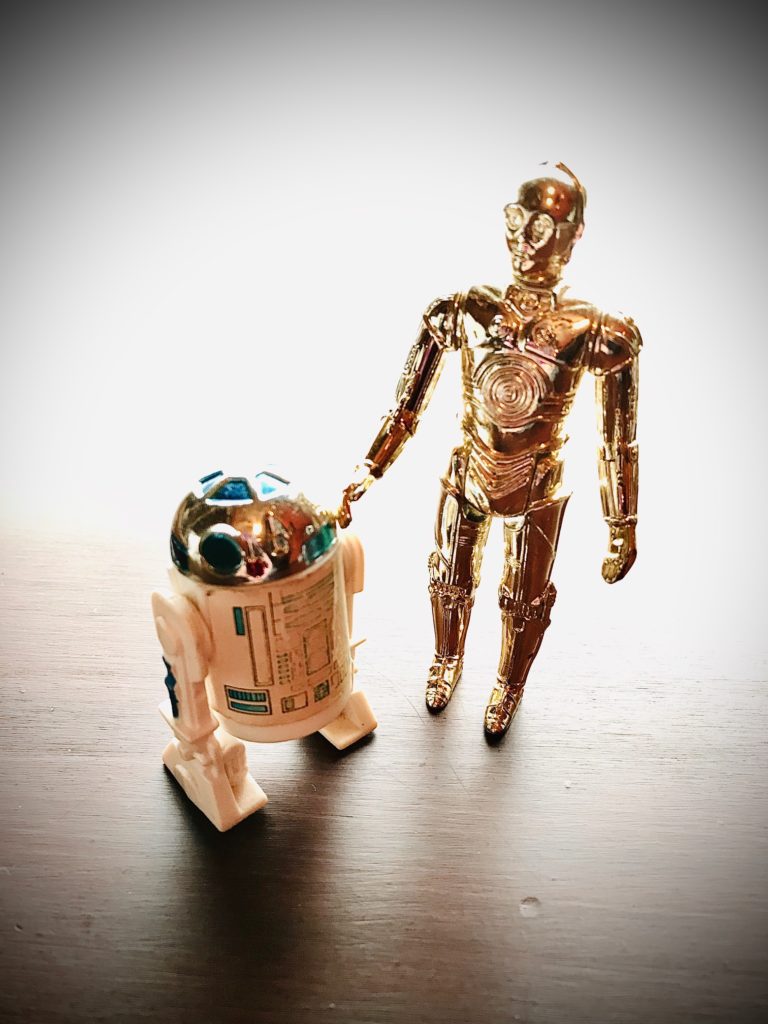 That movie, Star Wars, was nothing short of life-altering. R2-D2 has always been my favorite Star Wars character. I even have a theory that the entire story is somehow all about R2, and can trace R2 through all of the movies (except Solo. I’m still searching background scenes for a flash of blue and silver.) On Christmas 1977 I got my first action figures, R2-D2 and C3-PO (along with a Tatooine Luke that has since vanished).  I carried R2 to kindergarten in my bookbag, and almost three decades later carried this same R2 in my purse to Episodes VII & VIII.

One of the few redemptions of Episodes I-III was seeing R2’s backstory unfold as the little rebel droid that dodges Federation blockade blasts to come through and literally save Padme. And R2 was a rebel hero again and again throughout the galaxy (and almost 10 movies. seriously, they’d all be dead many times over without R2). R2 was always loyal to Leia, Luke, and the Rebellion.

After the triumph of Return of the Jedi, more than three decades passed before I got to visit that galaxy again. The Force Awakens was a revelation, and exactly what I had been waiting for all my life (a girl Jedi!!). Halfway through the movie, R2 is revealed to be powered down, asleep under a sheet like old furniture, missing Luke like Odysseus’s faithful Argos. A puppy-like BB8 prods R2, to no avail. Episode VII brought me to tears many times. And, of course, R2 eventually wakes to save the day and provide the full galaxy map to find Luke Skywalker.

In The Last Jedi, R2 finally reunites with Luke, and drops the equivalent of a droid f-bomb in critique of the planet Ahch-To. I love that salty little droid.

The story of this droid, and this galaxy far, far away, now comes to a close.

Reach Out, With Your Feelings

Tomorrow, I get to see the finale of a mythology that has been part of my entire life. One that emphasizes the goodness in all of us, even when darkness threatens to consume us. It teaches everything is connected, and that the energy that weaves through it all is accessible by each of us. It teaches us that princesses can do their own saving, and can grow up to be generals who get sh!t done. That the least likely people can pick up a lightsaber and completely change the story. That a babe in an evening gown is tough enough to kamikaze a warship. That loyal friends will always show up. And those friends can be a scruffy-looking misanthrope, a towering, growling Wookiee, or a rebellious rolling droid that curses in beeps and boops.

Star Wars redefined American film story-telling as much as it was a paradigm shift for how kids play, from toys to costumes, and from age 4 to 54. Is the hero the boy or the girl? The rogue or the knight? The 7’5″ wookiee, the 2’2″ Jedi master, or the rolling, smart-mouthed mechanic?

The hero is all of them. And it’s all here, in me, that galaxy far, far away.

May the force be with you. Always.

Confessions on a Dance Floor
Next Post: Stasis vs. Social Distancing