Nearly 40 years ago, I was a small, tomboyish fifth-grader. (Shout out to my GenXers!). This was an era when a 10 year old was still very much a kid. I certainly was. My school, Walt Disney Elementary School (for real), still held recess at lunchtime, but the playground equipment was less enticing at that age. I often walked around alone (happily, as a sensitive kid and an introvert), or bounced a small rubber ball from home against a wall, which was a soothing, solitary, meditative activity.

There were playground balls to be had, but the boys *always* snagged them all in the first moments of recess. Not that I had any athletic inclinations, but playground balls were a commodity and were therefore widely desired, even by me. 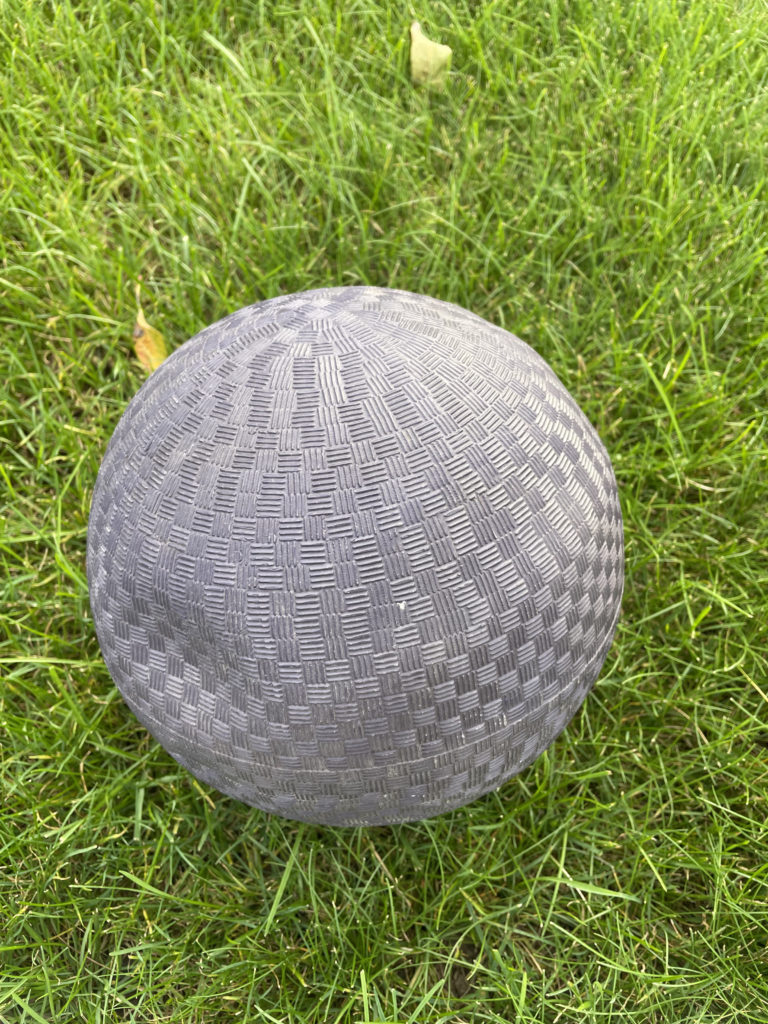 Again, I had no interest in most sports or in playing in large groups. However, sometimes it is nice to be included. Or at least to possess The Thing Everyone Wants. And there was no question that I would ever be able to snag a playground ball in the melee of the opening minutes of recess.

So one day I brought my own playground ball from home. It was pink or red, I think, and just the cheap kind from the giant wire basket display at the drugstore.

Whatever I intended to do with this ball notwithstanding, what came next was both unsurprising and, later, completely surprising. And to this day … eye-opening.

First day, I joined the after lunch lineup at the door with the ball cradled under my arm. It was to be a Brand New Day. No anxious scrambling for playground balls, or staring wistfully at the spot where the balls used to be. I stepped outdoors with no expectations except maybe to have a small group of friends kick or toss the ball around while we chatted. You might say I was making an effort to be more social.

What I wanted — what a small, quiet girl wanted — was not important.

Because within moments of stepping outside, some boy snuck up behind me, poked the ball out from under my arm, and ran off with it, beginning a session of that “flirting-with-bullying” playground game: Keep Away.

Did I mention I was not athletic?

It was really no-contest. No amount of running (which I hated doing anyway) would get me closer to recapturing my ball. The Boys were absolutely gleeful. See, they were not interested in playing with me, getting a game together with my ball. Their game was simply to keep me from playing with it.

I don’t question why. Boys will be boys? Indeed.

I don’t even blame them for it, given the times.

My experience wasn’t unique. After all, for millennia boys have been taking what rightfully belongs to girls just because they could.

I’ll amend that: Boys have been taking whatever they want from anyone just because they could.

Now, gentlemen, calm down. Just own that I’ve stated a simple truth. And, please, save your “What about me?”- stories about how a stronger boy victimized you in some way. That’s absolutely A Thing, too. Toxic masculinity is A Thing that ruins just about everything for everyone. But … This story is about something else. I am taking this space.

Okay, back to the Playground.

A few of my friends, other girls from my class, tried to be helpful. Some were athletes and went after the ball directly, chasing it all up and down acres of grassy field. But the boys always at the last second tossed the ball away to another shit-eating-grin rascal who bolted with it.

ALL the boys running around with a cheap pinkish ball (my ball), keeping it away from ALL the girls running after them. Where are the anthropologists when you need them??

This was an age, too, when boys and girls are starting to notice, well … boys and girls. So at an age when we are all teetering between schoolyard love affairs and ‘cooties’-battles, we have a defining event where girls and boys are chasing each other but we don’t know if we really want to catch them, if we’re actually mad at them, or if we are just enjoying the chase.

Can a game get any more binary?

Anyway, the boys successfully keep the ball away from the girls for the entire recess, dropping it only when it’s time to return to the classroom. The next day, the same thing happens. Holding the ball tighter only emboldened whichever boy knocked it loose from my grasp the moment my feet crossed the threshold.

The girls are never able to get an upper hand. I wonder now, were they really even trying or had it become A Game? I do say ‘they,’ because several of these girls were seasoned soccer athletes at 10 years old. It’s already established that I was no match on this field.

By the way, the teachers stood by oblivious. Not that I would have wanted them to ‘make’ the boys give the ball back. But, I mean … they said nothing.

For f#ck’s sake, I just wanted a game that wasn’t predicated on maliciously and a little violently taking something from me. Would a little kindness and inclusion be so bad? If this is supposed to be fun, it’s not for me.

This goes on for consecutive days. At one point, exhausted and a little perplexed by the whole thing, I wander away and sit by myself to wait for recess to end. On what turns out to be the final day, I have an idea during lunch. It is really a brilliant stroke of strategy, and not bad for a kid opposed to athletics:

Recess begins. The ball is, we’ll call it, ‘in play’ as the boys take it far out to the grassy field away from the playground, where this ‘game’ has been played all week. I call the girls over for a huddle and propose, “Instead of each of us running after the ball, let’s just turn to the boy closest to each of us and block him from being able to get it.”

I mean, that’s basically football, right? If not athleticism, at least strategy.

What ensues is mayhem. And absolutely successful.

The girls run out to the field like we always do. But instead of continuing the definition-of-madness chase of the ball, once we get out there en masse, the girls turn to the nearest boys and … take them down.

Well, the other girls do. While all the boys are being dominated one-on-one, the ball — my ball — is loose. I trot up to it, scoop it up, and trot off to wait for Team Girls to regroup. Everything happens so fast. These girls have taken “block him” to mean active physical blocking and some full-on tackling.

The teachers suddenly wake up. There is adult yelling and arm waving. The kind that means trouble is coming. Recess-is-over-early trouble. Heads-down-on-desks trouble. Possibly even Principal’s-Office trouble.

Clothing is rumpled and grass-stained. Hair is skirmish-tousled. A few small scratches. The boys drag off the field looking like a football team heading to the locker room at halftime down by … many points.

The mood is tense and quiet. I think the boys are genuinely surprised. The girls, too, maybe.

We worked together and took something back.

My memory of what came next is a bit fuzzy, but I do remember stern words and a cloud of disapproval hanging over the rest of the afternoon.

Did the Principal get involved?

Did the teachers know I was the mastermind?

Did I get in trouble?

Did they call my parents?

I honestly don’t know the answers to these questions. I know only that the overall sentiment was that What the Girls Did was Bad.

Let me say it again: What the GIRLS did was bad.

[Louder for the people in the back]… the GIRLS … BAD.

The game was stopped when the GIRLS became the aggressor, surmounted the boys’ ‘rules,’ and won. When the GIRLS prevailed, admittedly by unusual means, it was no longer considered appropriate playground play. By the way, as it turned out, when the girls organized, we were stronger than the boys.

I wonder if any of you reading were there? Do you remember any more details?

I will say this — for the boys who really got ‘taken down,’ I was then and am still today very sorry about the random scratches. The intent of an 10 year old girl was just to get her ball back so that some kind of inclusive game could be played. She/I didn’t want a bloodbath!

To be honest, as I was unaccustomed to winning at anything that required physicality, it was a huge surprise that my idea worked. A little too well, it seemed. And it revealed a vile truth about playgrounds and streets and workplaces and  boardrooms:

When women collectively exercise their power, using men’s rules against them, men’s edifice just may… crumble. And the rest of the world may chastise the women for winning. People may lose their minds that The Women even tried! Even — or perhaps, especially — if the winning is meant to equalize some inequity.

It’s all fun and games while The Boys control the game. It’s a good time! But once The Girls bring the same strength and gain control of the game, well that’s a Playground Revolution.

Men, every ball does not belong to you.

Women, if someone takes your ball, go get it. And bring your sisters with you.

“Though she be but little, she is fierce.”
Next Post: Decade