Day out with the aunt. Latin and life lessons included.

Summer is over for nephews K. and D. <sad trombone> Summer 2016 was ‘all-baseball all the time’ as both boys are on travel teams.

Practices started way back in March. For months, if they weren’t at a game, they were at practice. I don’t know how my sister does it with them on separate teams that play games and tournaments all over Western New York.

Baseball wrapped finally in mid-August, after the family returned from K.’s first time playing in a Cooperstown Dream Park tournament. I got a play-date squeezed in with barely a week to spare before school started.

Since K. and D. are now ages 11 ½ and 9 ½ respectively, it is far less pressure to be in charge of them all day. For starters, K. is a bit of a tween now, with shades of sullenness and stilted communication.

D. is still excited to see me, gives me a hug, and engages in a real dialogue. One morning earlier this summer when I had nephew duty, he initiated a conversation about what they were doing this summer, the books he was reading, and what school might be like in the fall. That morning, K. barely grunted in my direction.

Our final-days-of-summer-play-date was set up via FaceTime (welcome to the future!) when K. (yes, the tween!) requested a specific day and a specific destination: the beach.

Their morning at Durand Eastman Beach last Columbus Day left a big impression on him and he was eager to go back and look for more beach glass.

When I enter my sister’s kitchen at 8AM precisely, she is, typically, juggling making coffee, preparing and packing her lunch, and appeasing the dog, while flawlessly coiffed and attired. I shuffle in clean and wearing zipped-off hiking shorts. These boys have thankfully not yet entered the “I’m embarrassed by you”-stage.

D. appears fresh from bed with DiDi, his life-long soft buddy, in-hand. I say, “Is that DiDi?” He says, “Yeah!” and gives the blue elephant a squeeze. I smile, a little sad, wondering if this is one of the last times I will see him with DiDi. He rummages around on the counter and comes back with his fist held out.

“Do you want a jelly belly?” He opens his sweaty kid palm to reveal one bean offering. I love him, but I’m always leery of any kid handling something I’m going to eat. My sister clicks her tongue and mutters his name in a tired, low-key Mom-threat voice.

“Hmmm. I think I’d prefer to dispense my own.” I think I’m so smart. He comes back with his hand wrapped around the box. I poke my finger inside and choose one that looks like confetti, thinking it a safe bet.

My sister shakes her head, says his name in two distinct syllables, and says to me, “You’re probably not going to like that.” I pop the bean into my mouth.

She’s right. I chew it once and spit it out into my hand, rush to then spit into the trash can (and I am a known opponent of spitting), and lean over the sink rinsing my mouth with handfuls of water.

I’ve been Beanboozled. D. is dancing in delight. My sister zips up her day bag shaking her head at both of us, but I think she is also smirking. D. declares the bean was probably vomit flavor, and I have to concur. Should’ve stuck with his choice, sweaty-palm and all.

K. wanders down from bed wrapped in a blanket like a monk, then begins to placidly pray at the altar of Nickelodeon, i-device hymnal in-hand. Now that both of them are conscious and my sister has set off for work, I set out a visual aid to kick off the day. Each boy unfolds a piece of paper I have prepared, and each paper displays one of two words:

They are confused. D. decides it’s Spanish. K., flashing his tween lining, whines, “Whaat? I don’t know what that means.” I am incredulous and point out that they have access, literally at their fingertips, to the vast information on the internet.

These kids may be device-proficient, but I am always surprised at their yet-to-be-developed search skills. I let them spin their wheels for a few minutes chasing down Spanish translations before I reel them in, saying, “Just Google the two words together.”

They do, finding this:

Exclamation used to urge someone to make the most of the present time and give little thought to the future.

Not exactly the impactful definition I was hoping they would find. So I tell them that the loose Latin translation is “Seize the day,” and I write it out for them.

“Seize? What does that mean?” Surprise, the tween is visibly annoyed by a new challenge.

I do my best to explain that we have the whole day ahead of us, to do with whatever we choose. That it is a gift, and a waiting adventure. Often when I say to them something that I think/hope is profound enough to make a lasting impression, they reply with blank stares. Are they muddled again by their crazy aunt? Or, is this introspection? I hold out hope that it is the latter.

Alas, bowls of cereal and banal t.v. beckon, so I let them to have a lazy breakfast, warning that we will NOT be sitting around all morning.

They flank me on the couch as I pull up this stunning movie trailer for Rogue One, set to the Beastie Boys’ Sabotage. K. is enamored—he is my best hope for joining me in Star Wars adulation.

Somehow they get clean, dressed, and ready to leave the house by 10AM.

I drive them in my brand new Subaru CrossTrek, telling them that they are passengers on this new car’s first adventure. It is about 10:30 on a hot, sunny morning and all three of us lube up with sunblock in the beach parking lot.

We have the beach to ourselves. The water is mirror-like and the surf gentle enough to wade through calf-deep and easily spot beach glass flashing in the sand. K. & D. have experience now, so I don’t have to inspect every little thing they want to pick up. It is a peaceful walk in what feels like bathwater.

K., as usual, is way up ahead, knee-deep, and hauling in treasure after treasure. D., also as usual, is sticking close by me, showing me everything he finds, and occasionally whining. But, thankfully, not much whining—a sure sign that he is getting older. I give him the next piece of glass I find. He only once asks how long we’ve been here and when we’re leaving.

I notice that K. is becoming smaller in the distance, and he jogs back when I call out to him. His shorts look darker than when we got there.

He looks down at his wet shorts, and when he does, I notice the brim of his baseball cap is also soaked. Presumably from leaning over to retrieve beach glass from deep water. This kid does not do things a little bit.

Me: Is your underwear wet?

Me: Good, because you’re not sitting on my new seats in those wet shorts.

D: Haha, you have to sit in your underwear!

We wrap up Beach Glass Collection 2016 and head back to the car, where I find a blanket K. can sit on to prevent him the humiliation of riding around in his boxer briefs. Just a few minutes down the road is the Parkside Diner and adjacent Whispering Pines mini-golf course.

They boys are so well-behaved and polite that the waitress compliments them and lays two “Free Round of Mini Golf” coupons on the table. Credit goes to my sister, but I’m still pretty proud of them. Or at least glad we’re not getting the wrong kind of attention in public.

Over lunch, D. starts inventing words when he rushes himself while asking his brother if he can try a taste of his lemonade. 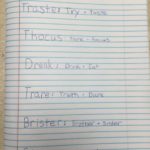 When I laugh and pull out a pen and paper to write down his new word, D. is delighted. He makes up a few more words at lunch, and continues making up words that evening. I’m feeling smug; this kid likes words.

After lunch we play 18 holes of mini golf. As usual, K. reigns supreme. If there is a way for a ball to roll optimized towards the hole under three strokes, K.’s ball will go that way. D. and me? Our balls come out in the worst spot, will get spit back, or just generally roll around the green until we wear out our 6-shot maximum.

Fortunately I don’t care, and D. is old enough to just enjoy the afternoon. In fact, when he runs around to see where K.’s ball comes out, and sees it roll to within a few inches of the hole, he says, “Of course.”

I’m rather enjoying this day out and decide that I want ice cream. The boys are happy to oblige.

For the ride over, I ask them if they liked that song from the Star Wars trailer, and if they want to hear it again. The answer is unanimous, so I load the Ill Communication CD and jump to track 6: Sabotage.

They LOVE it, and request it over and over that afternoon. My work is done here.